I’m not sure if this post can be proven any time soon, but in the future it may become common knowledge. However weather modification has been a tool for the US government since 1967 with Operation Popeye during the Vietnam War.

That operation was an attempt to extend the monsoon season with cloud seeding to disrupt the movement of enemy troops and supplies in the Asian nation of North Vietnam.

Well the odds of the movements of Hurricane Dorian over the last week seem to be very high and coincidental to be considered random.

Late last week President Trump (below) said in a Rose Garden sppech that Dorian would hit “dead center” without giving a specific location. He warned of its strength and to heed official instructions.

So what are the locations that were hit “dead center”?

Let’s look at the path of Dorian on the map below.

The other day, Trump said "it looks like this storm will hit DEAD CENTER".

Let's explore the ODDS that DORIAN would make a DEAD CENTER hit on Epstein Island & the Chinese / Denmark Ports in the Bahamas as a Cat-5 before turning NORTHEAST?#MAGA #QANON pic.twitter.com/R0vQZ5NDdZ

Little St. James Island in the American Virgin Islands, where sex trafficker Jeffery Epstein had his pedo operations was hit “dead center”. Then the storm looped around Puerto Rico causing minimal beach erosion and tropical storm winds, to make a beeline for the Bahamas.

By the time the storm reached Great Abaco Island in the Bahamas it was a Category 5 storm with wind gusts above 220 MPH. Hurricane Dorian parked itself over the island for more than 36 hours, laying waste to all of the island.

Now what is located at Great Abaco Island in the Bahamas?

One port is a joint operation between China and Denmark’s largest shipping company Maersk. The photo below shows the devastation of the Bahamian port. 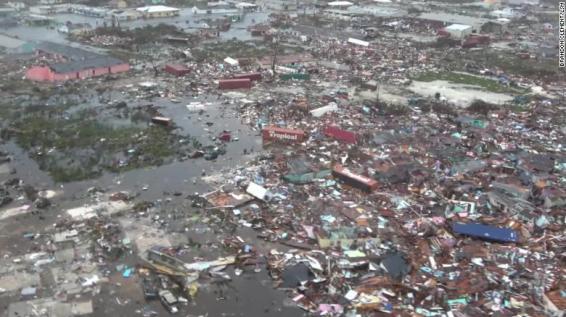 If you recall last month the Danish Prime Minister Mette Frederiksen called President Trump’s idea of buying Greenland “absurd” prompting the president to say her remarks were “nasty” and “Inappropriate”. The White House promptly canceled a state trip to Denmark scheduled to take place next week.

Just to clarify. These locations were Dorian hit were less than a mile from the eye of the storm, meaning they were “dead center”.

As of Wednesday morning, it appears a much weaken Dorian will turn north and most likely not hit the US mainland as it turns up the coast bringing rain and tropical winds to the southeast coasts.

I leave it to you to determine your level of skepticism on how many coincidences you are comfortably with before coming to a conclusion.

Lastly, my prayers go out to the people devastated by the storm and for the lives lost.